Councilspeak is all very nice, but they do not speak for us! 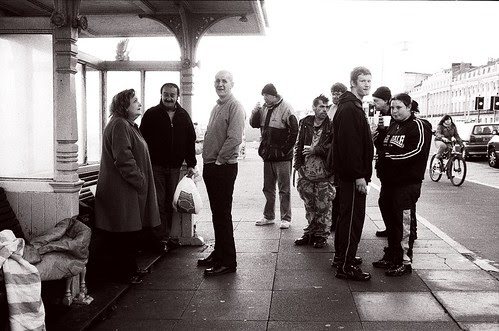 The Council are reportedly concerned that the Soup Run is 'part of the problem of homelessness, rather than the solution'. I wonder what the Council's 'solution' is.

I served at the Traditional Latin Mass tonight and went after to an 'extraodinary' meeting of another 'form'. The volunteers on the soup run at the Peace Statue met together for what I had assumed was a general chat about feeding the hungry. It was nothing of the sort. The meeting might just have been called, 'Guidelines on how to kowtow to the Council.'

A volunteer for a soup run at the other end of town gave us a talk. He dictated the entire discussion from beginning to end. He began the meeting by suggesting that 'complaints' had been made to the Council. When challenged over what the content of these complaints were, he then asserted that no formal complaint had been made. 'There is a general perception,' he said, 'that the soup run is a part of the problem of homelessness in Brighton, rather than the solution.'

I could not believe my ears. For a start, that a Council which does next to nothing for the homeless of Brighton and Hove have the utter, shameless audacity to dictate to the soup run volunteers on matters of 'health and safety', guidelines or even hygiene is a grotesque insult to both the homeless and the volunteers of the soup run. Secondly, soup run volunteers are not children who need to be told to wash their hands before making a sandwich and ensure their hands are clean when they give sandwiches out. We learned that when we were children! Unfortunately, the whole tone of this volunteer's talk was totally patronising, which, even if his heart was in the right place in terms of warning us to beware of the Council, did him few favours.

He is the 'eyes and ears' of the soup run on a Council committee forum on the 'homelessness prevention team' or something. What I, and other volunteers became disturbed by was his councilspeak on homelessness. He described the poor and hungry who are fed by the soup run as 'clients' and 'customers'. A man next to me who has fed the homeless for 30 years and I looked at each other in disbelief, muttering 'Clients!?' and 'Customers!? WTF!?'

Because of his language, dominated, as it was, by health and safety executive doublespeak, few in the room were left wondering whether he was speaking on behalf of the soup run or on behalf of the Council. It was highly disconcerting. Is this what happens when someone joins a Council committee? In one breath he was reassuring us of his loyalty to the soup run and of his commitment to the homeless and in the other he was speaking as if he were working for housing benefits. Everybody gave him the benefit of the doubt that he was working primarily as a voice for the soup run on a council committee on homelessness prevention but nobody left the room thinking that his perception of both the soup run and the homeless had not been infected with the Council's ethos a little regarding the homeless. I left wondering if the Council had been infiltrated by a volunteer of the soup run or whether the soup run had been infiltrated by the Council. We were all reassured by him that he was on our side and there is, as yet, no reason to doubt his word.

We were thus encouraged, out of this man's charity, that in order to appease the Council's distrust of the soup run and of the very poor and destitute, that we must ensure that we are highly trained in what amounts to basic common courtesy in the making and distributing of sandwiches, because, basically, the soup run is not very popular with the Council (because it makes them look bad and reveals the extent of Brighton's homelessness while they claim there are only 7 homeless people) and all the Council need is one excuse to close us down. This is probably very true.

For this reason alone, many, myself included supported this volunteer's advice, even if most of it was common sense and some of it totally and utterly misguided and unrealistic.

Let it be known. The day that the Council close the soup run in Brighton because it is bad for Brighton's tourist image is the day in which the good people of Brighton (and there are quite a few of them) make a public outcry so big that national TV cameras are in Bartholomew Square. How dare this Council even, for one minute, try and dictate to soup run volunteers, through one of the volunteers on their committee, how to do the soup run or try to frighten us of its future?! It is well known that apart from telling the homeless that they belong in another town because they have no local connection, the Council do absolutely NOTHING for the homeless of Brighton and Hove. The Catholic Church is there feeding the hungry every night of the week, 52 weeks a year, while the Council workers wash their hands of the homeless every single day. What is more, they get paid for doing pretty much diddly squat. At least we do something concrete and guess what, we don't get any money. If anything we end up out of pocket every now and then!

Well, obviously, the volunteers will continue to use their common sense and distribute food to the hungry in a hygenic and sensible manner as we always have done. Heck! We might even use a notepad, as we were tonight urged, to count how many homeless we feed when we arrive and do a quick head count for whatever strange purpose is needed in that respect. We will not, however, most definitely not, take lessons on how to treat the homeless from a Council committee who do not give a flying one about the fate or sufferings of the very people for whom the Council is their first point of reference and from whom these very same people receive jack sh*t in terms of respect, compassion, housing or even food.

And if the Council, one day, want to send the cops in to arrest the volunteers for feeding the hungry and dispossessed of Brighton because its bad for Brighton's image, then let them do that. I'd happily go to jail for that. Words cannot describe the ignorance of these Council busy bodies. Words cannot describe the corruption and wickedness of the Council. It is high time that those who are charged with the duty to care for and house those sleeping on the beach in Brighton are brought face to face with those who they neglect, with those they ignore, with those who they persecute, with those who they despise for no reason other than out of mere prejudice, suspicion, ignorance and fear! Health and safety!? Like the Council give a flying one about the 'health and safety' of the homeless of Brighton. Most of them wake up with their faces on the floor surrounded by piss every morning. Dear Brighton and Hove City Council. If you're really concerned about the 'health and safety' of the homeless of Brighton then house them and feed them!

'Customers', indeed! "Hi, you're our millionth 'customer' this decade. Congratulations! Have another sandwich!" Holy crap! What is happening to this country!?
at February 19, 2010

Brighton are some years behind Westminster then!

Westminster City Council complained about four years ago about the number of "soup runs" in Central London.

Soup runs are filling an important gap in services for rough sleepers, according to a new report part-funded by one of their biggest critics.

Research, carried out by the London School of Economics, and published by homelessness charity Crisis, found that soup runs can reach vulnerable people who may not be using mainstream services.

The report was part-funded by Westminster Council. Four years ago, the council’s then head of housing said soup runs were ‘creating perverse incentives for people to maintain a street-based lifestyle’. The new report, also funded by Crisis and the Communities and Local Government department, found that there was real value to some of the existing rough sleeper services in Westminster.

The researchers interviewed 105 soup kitchen users. The majority of users - 65 - were rough sleepers.

Jo Nurse, community manager at homelessness charity the Simon Community, said: ‘Some, especially those who have been on the streets for a long time, have no incentive to go to building-based services. Without soup runs [vulnerable people] would be in more trouble.’

Inside Housing is the "Industry" journal for people working in Housing and Homelessness services.

Why not contact Crisis and ask them for advice on how to defend the soup runs in Brighton?

Thamesreach is another excellent organisation helping rough sleepers in London.

hope this is of use to your group.

I have just had a letter from our labour parliamentary candidate following my telling one of their cancassers at the door recently that I could not longer vote for them.

She said she had enclosed some information about herself (not enclosed!) together with a campaign postcard for saving the local fire station (also not enclosed!)

Looking her up I could not help noticing that she was 'swift to act .. regarding the saving of trees in Clyde road.' Perhaps trees are her prioity over people? She also 'wishes to tackle poverty ' which sounds a bit like what the candidates for Miss World used to say because it sounded good.

She has suggested she 'pop round' and introduce herself - they must be desperate for votes! - 'should I feel it would be helpful.' I suppose this means should this help to change my mind about voting for them.

I do not have your talents for discussion so I am preparing a letter to send in reply to her. And how patronising for you all to be told to wash your hands before making sandwiches.

As someone who has lived and slept on the streets,soup runs ( handouts ) we call them..by we i mean,you can take the person off the street,but try to take the street out of the person..soup runs are vital,as a back to someone who has no other recourse to funds,plus company of like minded people..but they are also a trap..in trying to move away from homelessness
regards bullring
waterloo
london