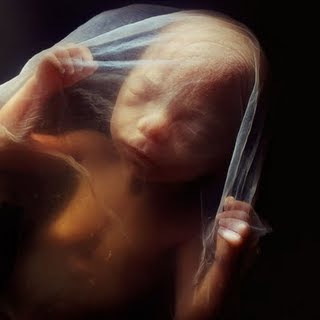 An unborn child at 16 weeks

A government media release yesterday cites a Catholic school in Bedford as a good example of how faith schools should implement the government's plans for sex education. The media release says (my emphases in bold):

"St Thomas More is a mixed secondary school in Bedford. 60% of students are from a Catholic/Christian background with 40% from a range of ethnic minority groups, including Muslim. It has achieved Healthy Schools Status and has an Outstanding Award for cultural diversity.

"St Thomas More delivers SRE [sex and relationships education] through the pastoral programme in conjunction with the RE syllabus. It is led by pastoral tutors, all of whom are well prepared and confident to lead discussion with students across a wide range of SRE issues.

"The school has developed a very successful balance of providing students with accurate information within the faith ethos of the school. For example, sex within marriage is promoted as the ideal of the Catholic faith, but the school explicitly recognises the reality that some young people may choose to be sexually active and, if that is the case, they need the knowledge and confidence to make an informed choice to protect themselves from pregnancy and STIs.

"The school nurse provides students with clear accurate information about the full range of contraception and STIs and details of local services. Chlamydia screening is also offered to students in Years 11 to 13. Pregnancy options, including abortion, are also discussed in a non-judgemental way with the RE syllabus requiring students to understand the spectrum of pro- and anti-choice views on abortion. By combining the pastoral and RE teaching, the essential knowledge component of SRE is provided to students but within the context of relationships and the school's values."

I will be writing to St Thomas More school, asking them to confirm or deny the government's claims about what is happening in its school. Readers of this blog may also like to write to the school at: Tyne Crescent, Bedfordshire MK41 7UL email@stm.beds.sch.uk If, however, the government's claims are proved to be true, then what is being taught is entirely contrary to Catholic pro-life and pro-family teaching:

"Fornication...is gravely contrary to the dignity of persons and of human sexuality which is naturally ordered to the good of spouses and the generation and education of children. Moreover, it is a grave scandal when there is corruption of the young."

St Thomas More (pictured) preferred to sacrifice himself rather than put the state's demands above the church's teachings. Catholic schools and the Catholic education system must be prepared to do the same.
at February 20, 2010

Only 50% of the pupils attending this school are baptised Catholics according to the report for the local bishop.

How can it be described as a Catholic School?

I notice that the word "Catholic" or "Roman Catholic" does not appear on the School's website at all.