Brown is a Bully? Nah! You don't say! 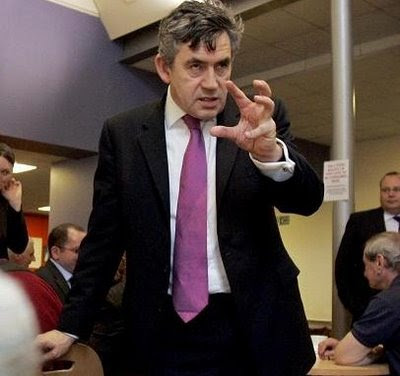 "So, Ed, basically, you should crush them. You grab them by the necks like so and..."

Gordon Brown instructs Ed Balls in the appropriate course of action for faith schools who disobey the proposed sex education plans once they've been approved by MPs who've been warned of the same fate if they disobey the whip.

Time and time again, from the Blair years, to the Brown years, Labour have proved themselves to be bullies in the 'workplace' and towards us, the people of Britain. From full body scanners, to streets crammed with cameras, to the smoking ban, to the wars which the majority were against. Labour are bullies and the only way you face down a bully is by standing up to him...even if he is your 'Big Brother'.
at February 22, 2010

You are so right. As I wrote in the Catholic Herald, the church should stand up to them. Thomas More and John Fisher did not say" we had better follow the guidelines!

As for bullying PMs, A small man will justify losing his rag (Brown has had people do it for him). Churchill shouted at a secretary in the dark days of the war, summoned her later, gave her a whisky and said: "I've been bery naughty." That's the difference. Brown is no Churchill!

Well, I think the smoking ban is a good thing.