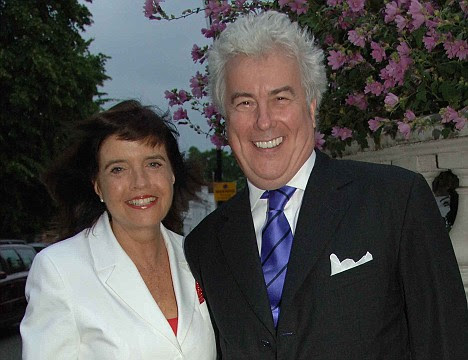 Yep...She was one of Blair's babes, alright. Stinking rich and still wanting more, even at our expense. I campaigned for her when I was in 'Young Labour' as a 17 year old, still wet behind the ears and ignorant of just how corrupt party politics was probably then and just how corrupt it would become. She's paid the £42,000 back now apparently.

'Mrs Follett, wife of best-selling author Ken, was found to have made invalid claims for security, telephone lines and insurance for artworks.

She said: "I have repaid the total amount in full and am pleased that this matter has now been resolved. I claimed these amounts in good faith in accordance with the rules at the time. But as an independent review has now shown these to be vague and deeply flawed, I feel it is only right to repay them. This has been a sad and sorry episode in Britain's political life which I deeply regret."'

Uh-huh. I bet you do, lady! Now that you got found out! My big regret is that I spent a bit of my youth on the phone campaigning for you when I was young and idealistic and thought the Tories were the bad guys. Flippin' champagne socialists! Meanwhile, the same champagne socialists make laws to persecute the poor and tell the poor that the Benefits Agency are watching them 24 hours a day lest they give way and take a bit of work to top up on living on the absolute minimum. Shameless and rotten scoundrels, the lot of them!
at February 04, 2010

Can't you ask them to pay your parking fines, it's the least they could do to show a bit of gratitude.

Lawrence, being "minted" is not, in itself, a sin. It may be a burden that some have to bear but it should not provoke emotions of bile...more of pity (easier for a camel etc)
I appreciate that you are taking a stance (which has many admirable facets to it) but please do not go down the student route of hating success...apart from anything else, you are getting too long in the tooth for that. LOL.

These people have got a nerve standing by and letting the government run those "shop your neighbour" campaigns against benefit cheats. Not that I am in favour of benefit cheating but when the system is constructed so that people with low skills on benefits cannot afford to go to work as they end up worse off, the whole thing stinks.

That isn't what I said...I said she was minted and still defrauded the nation. Her husband was so loaded she had no need to diddle the taxpayer.

For the rich, their great wealth is not enough. Their love of money causes the souls of the rich to be damned, while the poor may make a bit of money just to survive.

St Anthony said the gates of heaven are narrow for the rich and wide for the poor.