Just How Much Money Is There to be Made Out of the Poor? 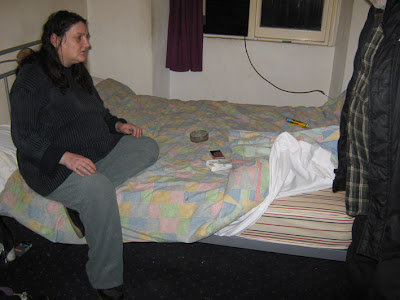 George and Diane in their room at Percival Terrace. Poverty is about choice, or rather it is about having no choice. You get, or you take, what is given and if you are given little then you take little because the only other option is destitution. This one room is accommodation for George and Diane who were placed here by the council following their eviction from a flat in the New England quarter of Brighton. That was a year ago and they are still there now. The accommodation is privately owned but the owners receive £250 a week from Brighton and Hove Council in housing benefit per person. For £250 a week in housing benefits, it could be argued that the Council could have found George and Diane something better than this one room for two people who are not partners. 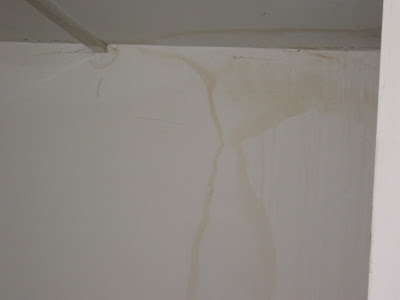 Damp on Diane and George's wall and ceiling. The Council placed George and Diane here in a room with one bed. Due to the fact that in the modern age, government agencies cannot look at any relationship without sexualising it, there is only one bed. George and Diane have a platonic friendship. George is Diane's carer and friend, yet they have been placed as if they were a couple. They have tried to explain that they are not but the Council clearly will not believe them. 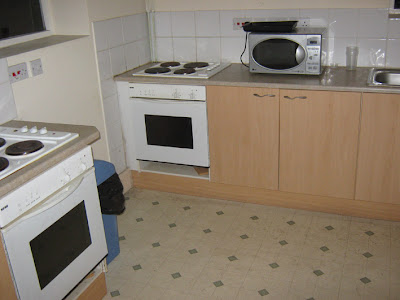 The kitchen (which is freezing cold) is shared by 15 other people living on the ground floor. We looked in the cookers and there was one rail for putting food on for the oven/grill in both. Understandably, they prefer to get take outs when they can. The Council have placed George and Diane here and George and Diane maintain that the accommodation is filled with men and women with drug and alcohol addiction, so it is clear that the Council do not mind placing people struggling with addiction in a place in which they are surrounded by other people struggling with addictions which means there is no shortage of temptation, or drugs. What an inhumane way of housing people! Now you understand why I think Thatcher was bad news, since so much council housing stock for the vulnerable has been sold off. Therefore, the waiting list for council housing is longer than the queue at St Peter's gate in the Middle Ages. 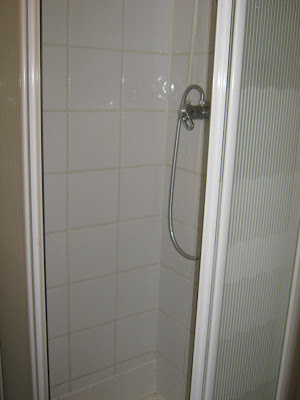 The entrance for the shower is so thin that George who is a bigger man cannot get in. I know that George and Diane are on benefits and a lot of people don't like people on benefits but Diane is a very ill person and is on a lot of medication. George looks after her and has helped her out of many difficult situations, perhaps even saving her life on a few occasions. The owners charge them a 'top-up' fee for the pleasure of staying here. Contractually the owners are obliged to clean the rooms and take away George and Diane's rubbish. They don't. The accommodation is not owned by the Council but the Council refer people here, place people here and give the benefits to the owner who takes the money and appears to give the tenants nothing in terms of quality of living space or comfort.

I could write a whole magazine, or even a book about the life of George and Diane. Diane is undergoing instruction in the Catholic Faith and George is a Catholic. Both suffered immensely when they were younger. The Council's treatment of the poor in Brighton is horrendous. Every state agency treats them like dirt. This is a long post but there is a point to this one. The owners of the hostel for the vulnerable and homeless where they live are not a charity.

The owners are a private holding company going under the name of Helgor Trading Ltd, who operate from an address from which operate seemingly over 20 other companies on whom one can ascertain absolutely no information whatsoever on the web. Whoever Helgor Trading Ltd are, or whoever owns them, are in the receipt of literally, hundreds of thousands of pounds of housing benefit every year. It is, in this light, no surprise that the hostel placed George and Diane in the same room, since this maximises the space in the rest of the hostel. The Council clearly have a referral system for this company who own this hostel, since the only way to get a room is to go through the Council who have a duty to house evicted Brighton tenants. That company, or whoever owns that company are getting absolutely minted out of renting rooms to the poor and vulnerable. What they give back to them is scandalously mean, cruel and abjectly unjust.

Similarly, 17-19 Grand Parade, which also is in the receipt of hundreds of thousands of pounds of housing benefit every year, is apparently owned by a company called Finextra Insurance Ltd, now apparently dissolved. Who knows who is raking in the housing benefits payments of the vulnerable there? I wonder how many hostels in Brighton are owned by holding companies who are making hundreds of thousands of pounds yearly out of housing the poor and giving them next to nothing in return. I wonder how those people sleep at night. For this kind of scheme amounts to the pillaging and plundering of the Poor. Someone out there is driving a BMW on the back of this and if anyone is to blame, it is the Council who clearly have contracts with certain dodgy holding companies running homeless hostels in Brighton. If I could find out more information on this I would, but annual accounts of these companies are strangely unavailable on the internet. Strangely unavailable on the internet, also, is their phone numbers. 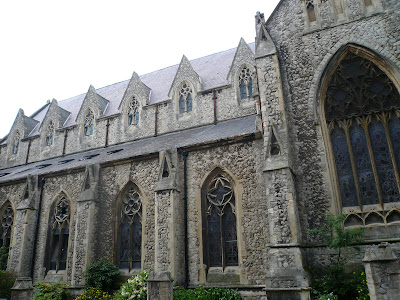 I recall, as do many Brightonians the scandal which broke over Fr Alan Sharpe's running of the Lorica St Patrick's homeless hostel. The real scandal was not the fact that the Vicar in charge was throwing a hundred quid to the odd homeless man. The scandal was that, for a 'Chrisitian' charity, it bore all the marks of a scam. The homeless are kicked out after 9 am and are then told they can come back at 7 pm, seemingly no matter what the weather.

The board of trustees of St Patrick's were (not sure who they are now), basically, Fr Alan Sharpe's family, who suddenly seemed to be driving around in flash cars. He left in disgrace due to a TV programme highlighting the deplorable syphoning off of housing benefits to the family of the Anglican vicar. That was bad, very bad, but this is, I believe, just as bad, since there is no 'charitable' activity taking place at privately owned hostels and there is no evidence at all that they are offering help for those recovering from addiction at all. They take their resident's housing benefits and give them next to absolutely nothing but toilet paper in return. In fact, they demand a 'top-up fee' for the 'pleasure' of staying there. It is a local and national disgrace. Why am I even thinking of turning up for an interview to do admin for this Council?! After all, who, really and truly, wants to be working for the enemy?
at February 10, 2010

You do. Get in, work hard without annoying people, keep your eyes and ears open.

Have you looked up these companies at Companies House? Is there anyone in the parish who could help you trace ownership of companies? Prepare a documented complaint about non-fulfilment of conditions. etc etc.

The other thing of course is to consider organising a house yourself. Find out how you can become a provider of accommodation on behalf of the council, look for a building, find a way of funding the whole business. You could probably rent a building as a whole - less hassle for the landlord that way - but to make it decent and make it pay, you'd probably have to be prepared to do it up yourselves (de facto, though not contractually).

Something along those lines. But from reading your blog I think you'd better do it in partnership with someone a bit calmer and more canny with money :) (that's not meant as an insult of any kind!)

That's a great idea. A truly caring and supportive hostel. Me, and my friends George and Diane would love to do that - maybe in the countryside!

There's a journalistic job needs to be done investigating and exposing this sort of thing. Well done for bringing this to light, Laurence. We ought to write to the council and landlords, and refer them to your post. Perhaps it will have some effect. If not, it needs highlighting with the local and national newspapers as well as the blogs.

You may find this useful.

This free 10 day trial of the Shelter guide to housing law looks excellent.

Then ask for a review of the decision.

"Be persistent
Sometimes councils will dig their heels in; the important thing to remember is that persistence, and presenting the council with reasoned argument as to why it should take an application, will often bring rewards. You can also make a formal complaint to the council where you believe they are acting unlawfully or unreasonably."

Homeless Persons Officers are under constant pressure from their managers to keep to an absolute minimum the no's of successful applicants. Managers constantly review applications statistics (I know I used to work in a HPU) and upbraid officers who are approving too many applicants.

Your homeless friends, the rough sleepers, need all the help they can get to overcome the Local Authority's rejections. The Shelter helpline is very useful but better is a good Housing Solicitor who detests Local Authorities.

(BTW I do not think you'll enjoy working for a Local Authority - they select docile "yes" men).

Is George receiving a Carer's Allowance which, I believe, he is entitled to. If not, the local CAB will yield some advice I am sure.

As you say, it's basically all down to paternalistic Governments who have no interest in being paternalistic to anyone for whom that might just possibly be beneficial !

If the Council is paying £250 per person per week for that, I'd have said it was a gross waste of public funds.

Perhaps someone ought to take it up with the Audit Commission !

The misery you are describing is just the end-of-the-line fallout from a chain of failed policies and attitudes. It cannot be prevented at that point.

Track a few of these cases and find out what brought people to their situation. What brought them to Brighton from some other place far away?

This is, incidentally, a situation that the country was virtually free of for a 30 year period after 1945.