"Whosoever shall exalt himself shall be humbled..."

"...and he that shall humble himself shall be exalted..." 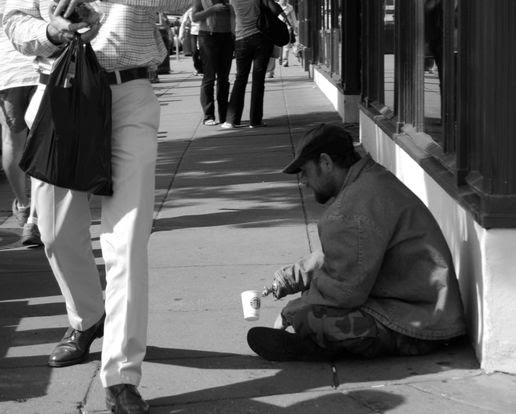 This is an incredible story that I heard from a lady called Marie last night...

When Marie was sleeping rough in another town a man in a flash car would drive past her and shout obscenities at her. He would drive near her and throw pennies at her and call her a 'dirty little tramp'. He would mock her and hurl abuse in her direction. He had 'everything'. He was loaded with enormous wealth, a lovely house a successful business of his own. One day, perhaps in a recession, he lost it all. His business collapsed, his house was repossessed and his flash car had to be sold. Whatever the reasons that he lost everything, he was made homeless. He became an alcoholic, a crack-cocaine user, a heroin addict and was made utterly destitute. How does Mary know this? She knows this because she found him on the street one day.

"Hey, I recognise you!" she said to him, "You're the guy who used to drive past me and throw coins at me and call me all the names under the sun." Apparently, when he saw her he burst into tears and wept on her shoulder and told her how sorry he was for his behaviour towards her. He cried on her shoulder for two hours. He had been reduced to misery and rubble and yet she who had received so much hatred from him, showed him compassion. She stayed with him on the street for over a week consoling him in the plight in which he now found himself, protecting him and looking after him. He learned his lesson, as they say, the hard way...

Incidently, while I'm on the subject, the same Marie told me another interesting piece of information. Apparently, during the Labour Party Conference, a BBC reporter found Marie on a street in Brighton. The reporter, a lady, asked Marie if it was true that there were only 6 people sleeping rough in Brighton, because that is what she had just been told by Brighton Housing Trust (BHT). Marie told her there was no way that was true. There are a lot more than 6 homeless people in Brighton. The lady gave her £10 and asked if she could interview her in 'a few weeks time' about it, because it felt as if BHT had just plain lied to her or massaged their figures to make Brighton look better than it actually was. Marie explained to her the reality of homelessness in Brighton, especially during the summer months.

Now, it turns out that the same BHT which massaged the homeless figures in Brighton & Hove during Labour Conference week, presumably to cover-up the fact that there is a homelessness crisis in the city in an effort to make them and the Council look good, are having a protest outside the BHT offices in Brighton tonight.

Are they protesting on behalf of the homeless? No. They are protesting on behalf of themselves because the feel they are not getting paid enough for the work that they do and for working longer shifts that they feel they should. BHT do a lot of outreach and work with the homeless, help the homeless find accommodation and the rest, all of which is a good thing. And yet, Marie and her friends, not surprisingly, find the protest a little insulting. This is because the workers will be sleeping rough for a night outside the offices to voice their protest because of pay and shift patterns. And they'll be doing it right near where genuinely homeless people sleep and beg.

Incredible! I'm all for a strike here or there if its a genuine appeal for better conditions and pay. However, such a public protest in such a way is genuinely insulting to the poor because firstly, let's face it, if you're going to dedicate your life to helping the homeless, then the homeless with whom you work presume you are not in it for the money and working conditions and, secondly, because a 'one night sleeping out' protest for better pay doesn't come close to what the homeless experience every day. "Try it for a week," she said, "and then they'll know how it feels!"

So, the same BHT (Bastard Housing Trust!) that massaged the figures to make them and the Council appear to be so good at managing homelessness are protesting about their pay and shift patterns for their work with the homeless by sleeping rough for a night, not in solidarity with the homeless, but for themselves and their own pockets. "Everyone knows," Marie said, "that they'll have the finest sleeping bags and all the rest, while we get pissed on with rain with the crappest sleeping bags." Her and her friends resentment is not based in the fact they are protesting against what they deem to be low pay and long shifts, it is the manner in which they are doing it. Personally, I think it is an insult to those with whom they work.
at October 07, 2009