Ireland and the EU: Rape? 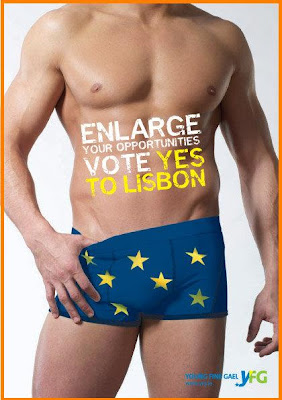 When does no mean yes?

Did they mean no, but said yes when plied with promises of EU financial benefits?

Were they in economic distress, poor, vulnerable and did the EU then seeing their vulnerability take advantage of their unfortunate condition?

Did the Irish "deserve it" because they were wearing alluring outfits or were scantily clad? Were they "asking for it"? Were they drunk? Okay, I'm stretching the rather ghastly metaphor now...

I don't recall the Irish people "asking for it", that is asking for another referendum. What is more, they deserve better than this. For the EU it seems, there is only one correct answer. Regardless, even if the Irish said 'yes' because they genuinely wanted the Lisbon Treaty for perceived benefits, perhaps the case for the EU's rape of Ireland is only just beginning.

After all, it won't take long for the EU to extend abortion laws, civil partnerships, probably assisted suicide and a tyrannical cloak of political correctness nationwide and ride roughshod over the sacred consciences of people who work in schools and hospitals in a great still-Catholic country, the inhabitants of which are still, in principle, against these trends in EU policy-making, nevermind the fact that they've handed over their national sovereignty to an unaccountable, undemocratic institution a million miles away, the President of which is likely to be a chief architect of the Iraq War.

The Irish, the English and many European countries spent years and years fighting for independence and sovereignty. How come countries want to kiss goodbye to national democracy? Actually, why do even politicians want to lose the power to make law in their parliaments? What's the point in being an MP if whole reams of laws are being made by MEPs?

It appears to me that the EU are a little bit like Tescos. Build everywhere, cut your prices and put the little guys out of business. It is incredible how quickly whole countries can be bought off. Is this what Michael Collins fought for? Crikey! I'll be he's spinning in his grave! Either way, consenting or not, Ireland just got buggered and if they don't regret it and feel sheepish tomorrow morning, they probably will one day.
at October 03, 2009

I don't have much use for the UN either!

The EU requires a birth certificate