The Imposter Pope Paul VI!? Has Anyone Heard This One? 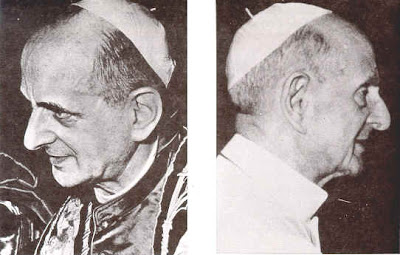 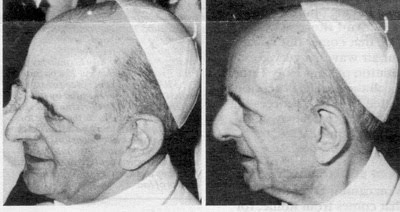 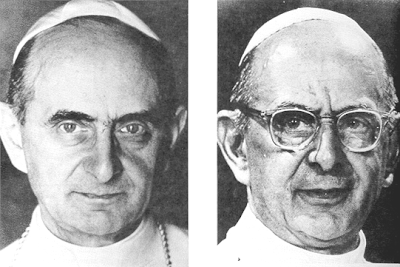 A website claims that Pope Paul VI was drugged and a body double was put in his place, who had extensive plastic surgery. He was betrayed, according to the website, by agents of satan, dodgy Cardinals placed all around him. In this way he was martyred, having said, On June 29, 1972, "From some fissure the smoke of satan entered into the temple of God."

This, according to the conspiracy, is how the Second Vatican Council was hijacked and the liturgy of the Church destroyed. Well, you know how much I love a good conspiracy theory. According to the website this was (one of) the Third Secret (s) of Fatima, that satan's agents within the Holy See had entered and made a direct hit on the Pope, drugged him up and put an imposter in his place. I don't think Our Lady of the Roses has been recognised by the Vatican as an official Marian apparition by the way. Not surprising! Crikey!

Meanwhile, as an aside, I found this story from the Daily Mail from January 2009.

The Pope is declaring a 'holy war' against people who claim falsely that the Virgin Mary is appearing to them. He will attempt to snuff out an explosion of bogus heavenly apparitions with new guidelines to help bishops root out frauds.

Benedict XVI plans to publish criteria to help them distinguish between true and false claims of visions of Jesus and the Virgin Mary, messages, stigmata - the appearances of the five wounds of Christ - and weeping or bleeding statues.

In some cases exorcists will be used to determine if a credible apparition is 'divine' origin or 'demonic'. The guidelines will be published by the Vatican’s Congregation for the Doctrine of the Faith. The Pope is said to be deeply concerned by the explosion in the number of pseudo-mystics who, claiming a direct line to God, set themselves against the bishops and lure the Catholic faithful out of the Church and into cults.

The handbook comes six years after the Pope - when he was simply Cardinal Joseph Ratzinger – first said that the boom in such phenomena posed a risk to the unity of the Church.


So, well done Fr Ray Blake for fulfilling his ministry in obedience to the wishes of the Holy Father, who made public a desire to see erroneous and heretical Marian sites of pilgrimmage investigated and censured. We put our trust in the Holy Father, the Successor of St Peter. As long as he isn't a body double and he's lying in a bed drugged up while some actor has assumed the Throne of St Peter!

According to so many websites Our Lady is popping up everywhere to lay people all over the globe to give important messages to the faithful about the Church, the World and the Future. Medjugorje, Garabandal and to a woman called Gianna in Emmittsberg, USA. They are all private revelations to lay people. And while Bishops, as we know in England and Wales, are not always right about everything, the Church isn't a democracy, and we've had so much 'empowerment of the Laity' recently, that it is worthwhile us Laity's preferring someone else's will than our own.

Most, if not all, conspiracy theories are bonkers. There was one in vogue in my youth that Paul McCartney had died in a car crash and had been replaced by a doppelgänger (this would go some of the way to explaining the horror that is The Frog Chorus). Then there were the theories that there were no manned moon landings, that Mossad were behind the 9/11 attacks, that Prince Philip and MI5 murdered Princess Diana, that Pope John Paul I was murdered, that Hitler was living in Paraguay, that Elvis hadn't died and was working in Sainsburys in Milton Keynes, that there isn't really a Santa Claus (Dan Brown started that one) and so on - each one more bonkers than the last.

You ask 'Has anyone heard this one?'
Yes, I found it on a web site some months ago and was fascinated by it. The ear lobe in one picture is in no way similar to the lack of ear lobe in the other! The nose is more difficult as the photos are at different angles. I remember that the Pope became more haggard due to illness in later life - but the ears?

the marian apparation at bayside, queens said he was an imposter, btw

Ignoring the. Bayside thing, there is an interesting book by the late Piers Compton (respected journalist) who wrote The Broken cross. There is an extraordinary chapter that Pope Paul 6 was 'replaced' by an actor around 1976 and the secretary of. State ran the. Vatican until the death. Now Piers compton had never heard of. Bayside but this chapter recounts how a private detective was hired to go and see what was going on in the Vatican as changes were happening and they were worried. The photos are indeed striking and they speak volumes. I think anything is possible in the. Vatican - even Bertone said it was vipers and crows. Ignore bayside completely but what I would like to find out is the police report and they concluded that there was a double Paul 6. You can't make it up! Piers compton's book is free on-line called "the Broken cross" after her published it he got threats and a mysterious force pulled it from the shops. But luckily you can read it for free. Riveting. Don't discount the theory as it could be true. The photos are spooky. I don't put anything past murky doings in the Vatican