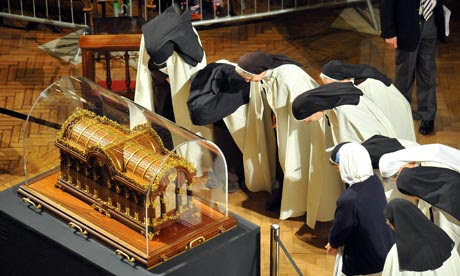 Courtesy of The Guardian, article by Stephen Moss.

It is a gorgeous day, cold and bright, the sky a flawless blue. A day you could almost believe in God. Amid the throng just down the road from the Houses of Parliament (an institution in urgent need of divine intercession), here is Catholicism at its most assured: a grand sense of occasion, a large crowd to venerate the relics of St Thérèse of Lisieux, the plaza outside Westminster Cathedral feeling like a miniature St Peter's Square. Even the burger van, installed for St Thérèse's three-day visit, is decked out in episcopal purple.

I start queueing to commune with the relics at 10.30. The queue zigzags across the plaza, and a steward warns me to expect an hour's wait. Entertainment is laid on in the form of a largish screen on which the faithful enthuse about Thérèse, a French nun who died of tuberculosis in 1897, aged 24. But the captions don't quite fit the screen – a fault never rectified by means miraculous or mechanical...for more click here.

Bravo, Stephen! Good for you, Bro! May her prayers win you countless blessings! In contrast, Sophia Deboick wrote in The Guardian yesterday on the phenomenom and maintained that, 'It may be popular among ordinary Catholics, but the cult of St Thérèse serves the hierarchy's political purposes well.'

In his blog post on the visit of the relics of Saint Thérèse of Lisieux to the UK this month, Andrew Brown said that "Thérèse's cult, though stimulated by her family and convent, grew among ordinary Catholics first" and even die-hard atheist commentators seem to have accepted the idea that the both the wider cult and the ongoing international tour of the remains of Marie-Françoise-Thérèse Martin are characterised by a spontaneous outpouring of devotion amongst the faithful. But far from being a grassroots movement, the tour has been vigorously marketed by a powerful political entity – the Catholic Church...for more (atheistic propaganda) click here.

Hmm...the Catholic Church, a 'political entity' so powerful that the UK Government ignores every piece of advice on every moral issue of the day which She offers it. Well, Sophia, I'm just a layman and I organised the pilgrimmage to Aylesford, not because my Priest told me to, but because it was obvious that other lay people wanted to go as well as myself. We had a wonderful, Grace-filled day, thanks very much! Ask your colleague Stephen about it because it sounds like he rather enjoyed it too!

"The Catholic Church - a powerful political entity". Wow! That sounds bad and dangerous. Surely, she doesn't mean it is dangerous in the UK?

The first article was nice. Glad the Guardian is able to write something almoust encouraging about Catholics.

All these articles about a little known (to non-Catholics) French Carmelite!

This is the work of the Lord; a marvel in our eyes