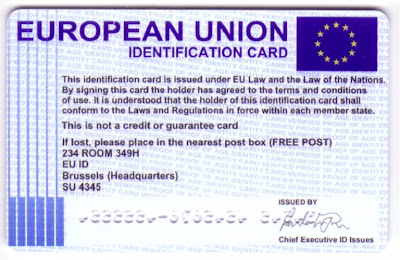 The Lisbon Treaty is a benign, democratic, benevolent, EU document which respects the individuality of nation states, liberty and human freedom.
Course it is!
It is...Until it reveals itself in its reality...Welcome to the Brave New Europe, complete with, 'public security organisations' for the sharing of DNA and fingerprint databases, to be kept and stored for a new digital generation of ID cards, to include CCTV footage and material gathered from internet surveillance.'

That's why Gordon Brown can drop the ID card scheme...Because the EU are going to do it for him anyway. Clever, clever! There'll be nothing sovereign states can do about it because they handed over decision-making powers to the EU! And the right to protest? Well...who is going to go all the way to Brussels to protest?

If we're really unlucky the EU ID card might actually have President Blair's smug mug on it. The EU will not respect your liberty or your freedom, nor mine. It has been orchestrated by a political elite progressively, building block, by building block, since 1950, with only one thing on their mind - Power in the hands of a relatively small group of people who are into such dodgy pursuits as 'population control' as a means to saving the 'environment'.

To think that the goals of the EU are centred on anything other than the wishes of a group of very rich, very powerful, very dishonest men and women is naive. Furthermore, given the kind of legislation that emanates from the EU, I would expect the Catholic Church to come under even more fierce and restrictive attention from the unaccountable body's predominately secular atheistic agenda.
at October 04, 2009