Did You Know That... 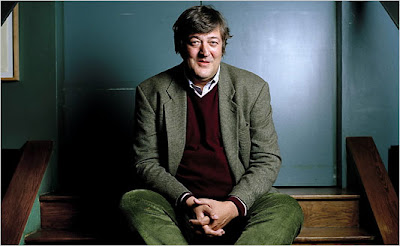 Stephen Fry recently made horrid, awful anti-Polish and anti-Catholic remarks recently basically suggesting that that Polish Catholics were largely to blame for the Holocaust, citing which side of the German border Auschwitz resides. What a scandalous thing to say, given so many Poles met their deaths at the hands of the Nazis and how awfully anti-Catholic of him?

But did you know that the same Stephen Fry is hosting a screening of 'Brief Encounter' near on the South Bank or something, the proceeds of which will go to the Homeless charity, 'The Passage', (oo-er!) which was set up by the late, great Cardinal Basil Hume? I know not everyone thinks he was that great, but I thought he was great having read some of his stuff.

So someone who clearly harbours anti-Catholic or even anti-Polish Catholic resentment is hosting an evening, the proceeds of which go to a Catholic charity. Who is being more charitable here? Stephen Fry? Or Westminster Cathedral? By rights, surely, in the light of his remarks against the Polish Catholic community, a not negligible number of whom live in London, he should be dropped as the host of this charity film fest, even if it is an English classic, or should issue a swift apology for his outburst? Okay, he has done, but I still think the Poles might be rather naffed off with him.

Somebody as intellectually nuanced as Mr Fry should know better than to contaminate history with his anti-Catholicism and colour events according to his prejudices. I always thought he was bigger and better than that. I don't know. I'd be apprehensive meeting Mr Fry. I think he'd eat me for breakfast, intellectually at least, and then ask me whether I'd like any.
at October 18, 2009