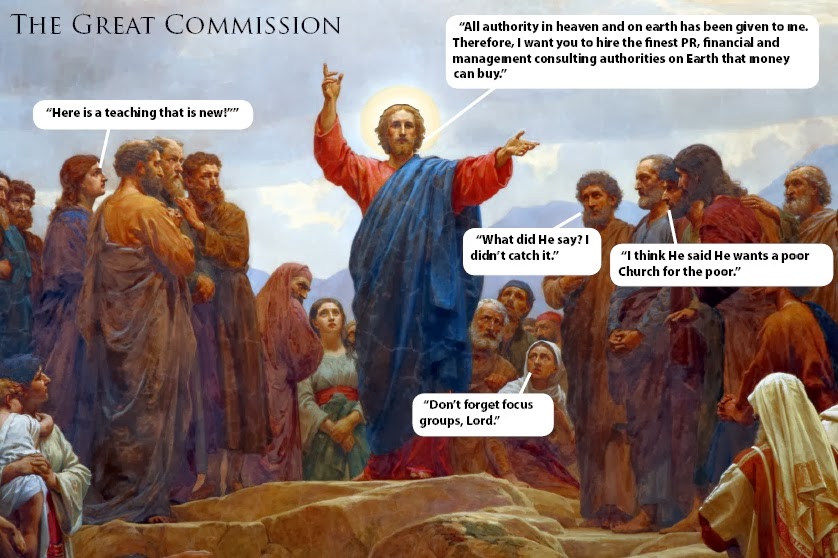 Today's must read is Sandro Magister's 'The Curia of Francis, Paradise of the Multinationals'.

Though I must admit, I had a giggle at this, I think we all (and I include myself here) be very careful in how we approach the person of the holy father. I realise I have been far too critical, and not trusting in the Holy Spirit to put right some of the mistakes that may happen. For better or worse, Christ has allowed him to become his vicar on earth so we must be very careful when engaging in any criticism.

Look at it from this angle. I was recently talking to a Franciscan of the Immaculate (one of the traditional ones who is most likely a target of Fr Volpi). I said to him that I realised his order was in some trouble and that I was praying for them. His reply? 'As long as we keep close to Christ, Our Lady, the a Church, and the Pope, we'll be alright'. When he said that to me it changed the way I looked at it, and reminded me that the Pope, for better or worse, is a Divinely instituted authority, and not some tack on to the Church

Pope of the poor. Poor what? exactly. People in the pews paying for all this multinational mandated 'militant interfaith dialogue, ecumenism' and Church empoverishment?

pennies wise, pounds foolish - or is everything right on schedule?

Perhaps 'Bergoglio' needs to call his rabbi to find out?


people keep saying pray for the Pope, but prayers should be specific so perhaps praying for Bergoglio, or the Bishop of Rome or Papa Mundi would be more helpful.

McKinsey were the original brains behind the first re-organisation of the NHS! Look what transpired. Circa the same time they "advised" construction firm Bovis - their advice was "binned". All very costly.! I think William Hague worked for them after university.

The U.S.-based McKinsey & Company hired by the Vatican to improve its communication offices is founding corporate member of the US Shadow government "Council on Foreign Relations".
http://en.wikipedia.org/wiki/Members_of_the_Council_on_Foreign_Relations
http://en.wikipedia.org/wiki/Council_on_Foreign_Relations
http://www.cfr.org/
http://www.youtube.com/user/cfr?feature=watch
Dick Cheney ex-director of CFR talks to David Rockefeller
http://www.youtube.com/watch?v=BbnpN07J_zg

Former mentor to Bill Clinton (also a member of the CFR), Carol Quigley said this:
“The CFR is the American Branch of a society which originated in England, and which believes that national boundaries should be obliterated, and a one-world rule established.”
http://www.infowars.com/msnbc-i-love-the-cfr/

McKinsey in their own words:
“McKinsey is a place where LGBT people thrive.
GLAM (Gay, lesbian, bi, and trans at McKinsey) is a vibrant, connected, worldwide network of LGBT colleagues who are committed to each other’s success and to attracting more talented LGBT women and men into the McKinsey community.
Our commitment to LGBT equality was confirmed in 1995 when a group of entrepreneurial colleagues formally created our LGBT professional network. With strong support from McKinsey leadership and the broader organization, GLAM has evolved and grown to include men and women (our fastest growing segment) from all orientations and all regions across the globe.(…)”
http://www.mckinsey.com/careers/values_that_matter/diversity_and_inclusion/lgbt_at_mckinsey

“The best way for someone outside McKinsey to understand the vibrant reality of diversity inside McKinsey is by sharing a sense of what it’s like here. We are women and men, straight and gay, single and married, with biological kids, adopted kids, foster kids. We represent every race and religion you can imagine.“
http://www.mckinsey.com/careers/values_that_matter/diversity_and_inclusion

More about the other companies hired by Vatican officials:
http://www.renewamerica.com/columns/engel/140101