The Hunwicke Files: Is there a Loftus Connection?

As avid readers of the Catholic blogosphere will be aware, Fr John Hunwicke, an ex-Anglican priest who has joined the Ordinariate of Our Lady of Walsingham, instituted through the Holy Father's extraordinarily generous appeal to traditional Anglicans, Anglicanorum Coetibus, has had his ordination to the Priesthood deferred for reasons which have not yet been identified.

Avid readers of the Catholic blogosphere will also be aware of a controversial Monseigneur by the name of Basil Loftus who has steadily, over time, built up a reputation for threatening to sue critics of his controversial writings for The Catholic Times and letters, which are publicly, at times, at odds with the Magisterium of Holy Mother Church.

Avid readers of the blogosphere will be aware that Mgr Basil Loftus has already succeeded in closing down one Priest's blog, that of Fr Michael Clifton, whose blog, Fr Mildew, was closed down (though it has reopened now) in a sour episode which was documented by The Telegraph's Damian Thompson on his blog. Fr John Zuhlsdorf also did a wonderful sift through some of of his writings on Vatican II and the suppression of the Traditional Latin Mass which can be viewed here.

Avid readers of the blogosphere, may or may not have been reading Valle Adurni recently and noticed a comment by someone suggesting that there could (emphasis on 'could') be a Loftus connection to Fr John Hunwicke's deferral for Ordination to the Sacred Priesthood and/or the sudden closure of his blog. It sounds extraordinary that a Monseigneur could have such sway and influence in Fr Hunwicke's Ordination and in his online ministry which has delighted many Catholics (and more than a few Anglicans) but then again we know Mgr Basil Loftus to be a far more "unjust aggressor" than any unborn baby. 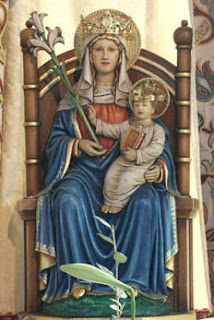 I hope to God that the commenter has got it all wrong and that there is just some strange 'technical hitch' in Fr Hunwicke's transition from lay man to Catholic Priest which just needs to be ironed out after the Summer. Keep him and any enemies that he may have in your prayers. I'll certainly be lighting a candle for Fr Hunwicke at the Shrine of Our Lady of Walsingham. God bless readers. This will be the last post until I return from the National Shrine to Our Blessed Lady. Pray for Fr Hunwicke, pray for Mr L England and pray for England, Our Lady's Dowry.

Someone sent me this link today, by the way, to this video of a Catholic tele-evangelist (who is bald and unabashed). Oh, it is worth watching. Men, listen up and fast. If you thought Michael Voris was hardcore, wait until you get a load of this guy! It's time you stopped wearing shorts. Yes, you heard me. If you're the kind of guy who doesn't wear a suit when he's doing his share of the washing up you should think twice. Why? This is why...

Could this Loftus be a Freemason, by any chance?