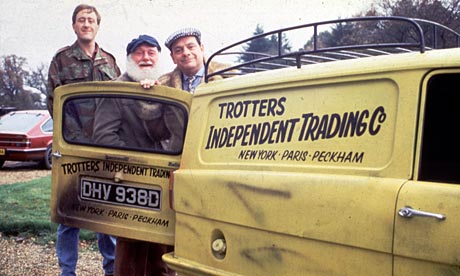 Well, Saturday was really quite an interesting day. A little market has started in Sillwood Street just off the city centre high street on Saturdays where a couple of local residents are selling their wares - mostly second hand stuff. St Mary Magdalen's still has stuff in the garage and I have some stuff to sell as well so when the van is up and running then it might be wise to sell there.

The bad news is a mechanic friend took a look at the underside of my vehicle and it needs a replacement exhaust - so I'm searching on Ebay and the like to see whether there are cheap parts that he can use to fix it for me. Gosh - the man who sold me this van really saw me coming! However, the mechanic thinks that one idea for the van could be to cut out the panels, turn it into a camper van and eventually sell it because people are really into camper vans. Then, he said, keep buying vans, turning them into camper vans and sell them because people can't afford the real thing.

The good news is that aside from the Sillwood Street market find, I now have a business associate called Gary who is trying to sell absolutely loads of religious devotional gear at the antique fleamarket in Lewes. He trawls all over Europe and finds a lot of Catholic devotional items to bring back to this country and sell. Take this, for instance, which he was selling at the Brunswick Square Festival. A huge Rosary!

He was selling this for £20 if anyone wants it. He also gave me a small box of plaster crucifixes for free for me to sell on the online shop. I've recently had a very kind bag of posters, statues and devotional items to sell from a reader. Gary, at Brunswick Festival, was interested in my proposal to him to be a channel for his stock - he could advertise his stuff on my site and then I take a percentage of the sale. He thought it was a good idea to get Catholic items into the hands of Catholics. Apparently, some of the stuff he has comes from Churches because they are closing down all over Europe. He said that was really sad.

It has to be said that the Brunswick Festival was an opportunity missed, as there were loads of stalls selling second hand items. There were a couple of 'alternative' stalls selling new age stuff. There was even a Scientology stall! I'll have to put the date in the diary so that next year there is a stronger Catholic presence. I enjoyed the Festival - there was music, food stalls, cupcake stalls, and an 'alternative remedy' tent with people having Reiki and Kineisiology and stuff. All very Brighton and I can't stand 'new age' therapies, but at least the whole event was more manageable and enjoyable than the Notting Hill Carnival. It looks like the Council relaxed their bylaw on street drinking as well, as nearly everyone (including me) was drinking a can, but that level of Council hypocrisy is pretty much par for the course in this town. I'll be posting up some pictures on my Catholic store blog of my new stock this week.
at August 21, 2011